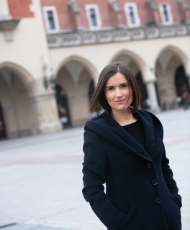 Dr. Agnieszka Stasiewicz-Bieńkowska is a researcher and lecturer at the Institute of American Studies and Polish Diaspora at the Jagiellonian University in Krakow. She received her Ph.D. from the Faculty of International and Political Studies at the Jagiellonian University in 2009. Her research interests comprise a variety of topics related to youth studies, girlhood studies, literature, popular culture, gender representations, and the fantastic. Dr. Stasiewicz has received several scholarships and grants: the Dagmar and Nils William Olsson Fellowship (Swenson Swedish Immigration Research Center, Augustana College, Rock Island, Ill., United States), the John F. Kennedy Library Grant (Free University of Berlin), and a scholarship at Griffith University in Brisbane, Australia. She participated in the following international research projects: “Letting the Wrong One In: Hospitality, Rape, and Consent in Vampire Popular Culture” (2014-2017); “Approaching War: Childhood, Culture and the First World War” (2011-2016, Leverhulme Trust); and “Negotiating Cultural Differences in the Digital Communication Era” (Polish National Science Centre; HARMONIA Grant). She was granted the Swedish Institute Scholarship within the Visby Programme twice for research work at Växjö University and the House of Emigrants (2007) and at Lund University, Sweden (2014-2015).

Her most recent works are: Hospitality, Rape, and Consent in Vampire Popular Culture: Letting the Wrong One In (Palgrave Macmillan 2017; co-editor and author of a chapter); Lustful Ladies, She-Demons, and Good Little Girls: Female Agency and Desire in the Universes of Sookie Stackhouse; a Special Issue of Continuum: Journal of Media and Cultural Studies: As If: Women in Genres of the Fantastic, Cross-Platform Entertainments, and Transmedia Engagements (33.2, 2019); Exotic Otherlands, Headquarters of Death: Sub-tropical Land- and Cityscapes in The Southern Vampire Mysteries "eTropic" 16.1 (2017); and a chapter in "Children's Literature and Culture of the First World War" (Routledge 2016). Dr. Stasiewicz is a member of the International Research Society for Children's Literature. She speaks fluent English and Swedish.

2012, Ours Is America: The Self and the Other Interwoven Within the Immigrant Homemaking Myths; [in:] Landscapes of (Un)Belonging: Reflections on Strangeness and Self (eds. Orla McGarry, Agnieszka Stasiewicz-Bieńkowska), Oxford: Inter-Disciplinary Press, pp. 85-95.

2012, My Heart is Black and Yours is White: The Religious Self and Other in Constructing the Ethnicity of Swedish American Youth; [in:] Making Strangers: Issues of the Other in the Sphere of Identity, eds. Donald Domonkos, Oxford: Inter-Disciplinary Press, pp. 3-21.

2017, September 6 – 9, Tropics of the Imagination Conference, James Cook University, Singapore. Presentation: “Bring Some Black to a Vampire Bar: Sub-Tropical Cityscapes and the Exotic Other in The Southern Vampire Mysteries” (participation online).

2010, International Workshop on History and Migration: “Beyond the Border, Behind the Men: The Invisibility of Female Migration.” University of the Basque Country, Vitoria-Gasteiz, Spain.

2009, “New Perspectives on the European Mass Migration to America: An International Workshop at the House of Emigrants,” Växjö University, Sweden.

2006, Opening lecture during Sixteen Days Against Violence Towards Women: Violence and Law – Regulations Against Domestic Violence in Sweden, Krakow Association of Crisis Intervention.