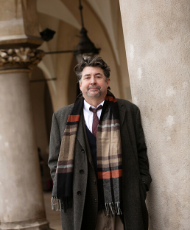 Patrick Vaughan is a professor at the Institute of American Studies and Polish Diaspora. He specializes in Cold War history and America's evolving global role in the early twenty-first century. He first came to Poland on a Fulbright Scholarship in 2000 and has subsequently received generous support from the Kosciuszko Foundation and the George Kennan Center/Woodrow Wilson International Center for Scholars. In 2003, his work on Zbigniew Brzezinski was awarded by the Polish Institute for Arts and Sciences and the Polish Embassy in Washington, D.C., as the top doctoral dissertation regarding Poland. In 2011, his strategic biography of Zbigniew Brzezinski was nominated for the Kazimierz Moczarski Historical Prize for one of the superior works in Polish contemporary history. Prof. Vaughan also teaches classes on Soviet and East European literature, the role of petroleum in the geopolitical contest in Eurasia, and science fiction as a political and social metaphor.

2013, Brzezinski, the Pope, and the ‘Plot’ to Free Poland, [in:] Zbig: The Strategy and Statecraft of Zbigniew Brzezinski, ed. Charles Gati, Baltimore: Johns Hopkins University Press.

2009, Zbigniew Brzezinski and the Helsinki Final Act, [in:] The Crisis of Détente in Europe: From Helsinki to Gorbachev, 1975-1985, ed. Leopoldo Nuti, London: Routledge.

2018, 24 May, Twelfth Conference of Media Ethics: “Truthful Media – Honesty and Truth in the Media,” Krakow, Poland.

2005, 15 June, “The Carter Administration and Human Rights,” Annual Conference of the Polish Institute of Arts and Sciences of America, Pittsburgh, PA, United States.

2006, 27 September, “Zbigniew Brzezinski and the Carter Approach to China: “The United States Has Made Up Its Mind,'” United States Department of State, Washington, D.C., United States.

2000, 18 June, “Zbigniew Brzezinski and the Polish Crisis, 1980,” Annual Conference of the Polish Institute of Arts and Sciences of America, New York, USA.

2011, 5 June, “On the Road: The History of the American Beatnik Movement,” Tischner University, Krakow, Poland.

2007, 14 May, “Polish-American Relations,” Sponsored by Newsweek and the United States Embassy, Warsaw, Poland.