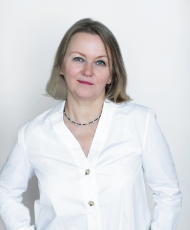 Prof. Szymkowska-Bartyzel graduated in Film Studies at the Jagiellonian University. At the Institute of American Studies and Polish Diaspora, she prepared a doctoral thesis devoted to American myths and cultural motifs in television commercials. Prof. Szymkowska-Bartyzel has participated in numerous conferences both in Poland and abroad and is the author of articles dealing with the influence of American popular culture in Poland. She has taught at the universities in Vaxjo (2009), Prague (2012), Coimbra (2013), and Bologna (2016) and was a co-organizer of projects promoting American culture in Poland: the American Dream exhibition at the National Museum in Krakow (2009) and photographic exhibitions of scientific expeditions to the United States in 2010, 2012, and 2015.

2017, From Domination to Contestation: The Changing Faces of American Popular Culture in Poland After 1989, [in:] Miracle Fair: Poland in Transatlantic Relations After 1989, ed. Małgorzata Zachara, Cambridge Scholars Publishing, pp. 222-247.

2009, William Thomas Stead and His 1901 Vision of the Americanized World; [in:] The United States and the World: From Imitation to Challenge, eds. Andrzej Mania Łukasz Wordliczek, Krakow: Wydawnictwo Uniwersytetu Jagiellońskiego, pp. 251-262.

2019, 23-24 May, international conference: “The City and the Arts,” Faculty of Humanities and Social Sciences, Károli Gáspár University of the Reformed Church in Hungary, Budapest, Hungary. Paper: “A Self-Made Woman in New York: Margaret Fuller as an Urban Reformer.”

2018, 26-27 April, international conference: “The Transnational Legacies of 1968: Between Memory, Politics, and Culture.” Department of North American Studies, Charles University in Prague, Czech Republic. Paper: “Rebels on the Stage: Polish Theater and Social Resistance in 1968 and 2018.”

2016, 22-15 April, international congress of European Association of American Studies, Contstanca, Romania. Paper: “Towards the Co-Creation of Cultural Diplomacy: The Case of the American Dream Exhibition, Poland 2009.”

2015, 20 March, international conference: “Back to the Game? Poland in Transatlantic Relations After 1989.” Institute of American Studies and Polish Diaspora, Jagiellonian University in Krakow, Poland. Paper: “The Changing Faces of American Popular Culture in Poland After 1989.”

2013, 21-23 June, Tenth Professor Andrzej Bartnicki Forum for the Advanced Studies of the United States, “American Success: Its Many Faces Past and Present.” University of Bialystok, Poland. “Successful Against all Odds: Margaret Fuller as a Nineteenth-Century Self-Made Woman.”

2012, 11-12 May, international conference: “The Sixties: Legacies,” Center for American Studies, University of Warsaw, Poland. Paper: “Counterculture and Hyper-Capitalism: Commodifying the Rebel – The Case of Harley-Davidson.”

2009, 29-30 May, international conference: “The United States and the World: From Imitation to Challenge,” Institute of American Studies and Polish Diaspora, Jagiellonian University in Krakow, Poland. Paper: “William T. Stead and His Vision of an Americanized World.”