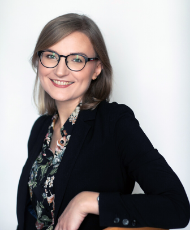 Monika Sawicka holds a PhD in Political Studies (2018), a Master of Arts in Portuguese Philology (2010), and a Master of Arts in International Relations from the Jagiellonian University. She studied at the Faculdade de Letras at the University of Porto in the 2009-2010 academic year (Erasmus Exchange Program) and participated in the Academic Educational Cycle Sustainable Development – Global Challenges organized by the Institute of Geography and Spatial Management at the Jagiellonian University (2012). Between 2011 and 2015, she conducted several research projects in Brazil, including in the Archive of Diplomatic Documentation of Brazil's Ministry of Foreign Affairs. She is a member of the Terra Brasilis Foundation.

2020, Brazil in the International System. The roles of an emerging middle power [in Polish], Krakow: Universitas, pp. 360.

2018, Konflikty międzynarodowe z perspektywy globalnego Południa: rola Brazylii jako mediatora na Bliskim Wschodzie (“International Conflicts from the Perspective of the Global South: The role of Brazil as a Mediator in the Middle East”), [in:] Między Wschodem i Zachodem, między Północą a Południem 2 (“Between East and West, Between North and South 2”), Warsaw: Wydawnictwo Campidoglio, pp. 113-124.

2017, 9-10th November, Seventh Convention of the Polish International Studies Association, Jagiellonian University in Krakow, Poland. Paper: "The Meaning of the Region of South America in the Foreign Policy of Brazil, an Emerging Middle Power” (in Polish).

2017, 24th May, “Between East and West, Between North and South”, Fourth Polish Interdisciplinary Student Conference, University of Warsaw, Poland. Paper: “International Conflicts from the Perspective of the Global South: The Role of Brazil as a Mediator in the Middle East” (in Polish).

2017, 23rd May, “Polish-Brazilian Experiences in Economy and Management: Recent Trends,” University of Warsaw, Poland. Paper: “From a Lonely Island to a Leader Without followers? Brazil’s Role as a Regional Integrator: The Case of Mercosur.”

2013, 6th December, “Environmental Protection in Latin America: Argentina, Brazil, and Ecuador – Threats and Solutions;” conference of the Latin-American Program of the Lech Wałęsa Institute and the Department of Latin America at the Jagiellonian University in Krakow, Poland. Paper: “Protecting the Biodiversity of Brazil: The Case of the Belo Monte Dam Dispute’ (in Polish).

2013, 11-12th April, “Latin America as a Laboratory of the Future: Inspirations for the World;” conference of the Centre for Latin-American Studies (CESLA), University of Warsaw, Poland. Paper: “Innovation in Brazilian Development Aid in Africa: The Impact of Brazil in the Transformation of the Existing Architecture of Development Assistance” (in Polish).

2013, 15-16th March, “Human Rights in Latin America: Theory and Practice;” Third Cracow Latin-American Conference, Jagiellonian University in Krakow, Poland. Paper: “The Theory and Practice of Protecting the Rights of Indians in Brazil as an Example of a Dispute About the Hydroelectric Power Station Belo Monte” (in Polish).

2011, 25-26th May, “Brazil in the Contemporary World;” conference of the Centre for Latin-American Studies (CESLA), University of Warsaw, Poland. Paper: “Brazil After the Presidential Election: The Administration of Dilma Rousseff” (in Polish).

2020, 19 January, paper: "Sytuacja rdzennych społeczności w Brazylii w epoce Bolsonaro" (“The Situation of Indigenous Communities in Brazil During the Bolsonaro Era”); during the Otwarte serca dla Amazonii (“An Open Heart for the Amazon”) festival (in Polish).

2019, 23 May, paper: "Polityka zagraniczna w czasach kryzysu czyli brazylijskie tupi, or not tupi" (“Foreign Policy in Times of Crisis, or the Brazilian Tupi or Not Tupi”), Fifth Academic Encounters with Latin America, University of Maria Curie-Skłodowska in Lublin (in Polish).

2019, 8 April, paper: "Tajemnice brazylijskiej Amazonii" (“The Secrets of the Brazilian Amazon”) during the event: "Biblioteka w stylu... latynoamerykańskim" (“The Library in the… Latin American Style”), Pedagogical University in Krakow, Poland.

2016, 19th May, “The Political Crisis in Brazil: Impeachment or Coup?” (in Polish), lecture held at the Institute of American Studies and Polish Diaspora, Jagiellonian University in Krakow, Poland.

2015, 11th December, “Brazilian-Cuban Estrechamiento in the Dilma Rousseff Administration” (in Polish); the Latin-American seminar: “Cuba in the Post-Hegemonic World: A Year After D17” organized by the Institute of American Studies and Polish Diaspora, Jagiellonian University in Krakow, Poland.