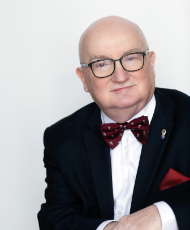 Prof. Mania graduated with a degree in History in 1972 from the Jagiellonian University, where he received his doctorate in 1975, obtained a habilitation in 1983, and became a professor in 1993. He is the member of numerous scientific societies (PAU, PAN, PTH, PTNP, PTSM, scientific advisory institution of the Committee awarding the Nobel Peace Prize, Kennan Institute of Advanced Russian Studies, Smithsonian Institution, Washington, Salzburg Seminar 1989 and 1991). He spent much time in foreign scientific centers, including at the University of Wisconsin, Stevens Point; the University of Padova; the School of Slavic and East European Studies, Univ. of London; New College - Oxford University; and law faculties at: Cleveland State University, Loyola University Chicago, the University of Indiana at Indianapolis, and Fordham University New York; the John Hopkins Univ. in Washington, D.C., and at the Bologna Center; the Free University of Berlin; Georgetown University; and the George Washington University. Prof. Mania has conducted research in the following presidential libraries in the United States : Franklin D. Roosevelta (in Hyde Park), Harry Truman (in Indianapolis), D. Eisenhower (in Abilene), John F. Kennedy (in Boston), and Lyndon Baines Johnson (in Austin); at the National Archives of the U.S. in Washington D.C., the libraries of Gerald Ford (Ann Arbor), Jimmy Carter (in Atlanta); in academic centers educating diplomats, Washington, D.C. New York, Bedford near Boston, at the universities of Prague and Upsala, as well as at the Hebrew University of Jerusalem. In 2008-2016, he participated in about thirty visits to universities and scientific networks (e.g., IRUN, Coimbra Group, Utrecht Network), of which the Jagiellonian University is a member. He represented the Jagiellonian University at EUA (2011 Aarhus, 2012 Warwick, 2014 Brussels) at CDE-EUA; at EAIE (European Association for International Education), and the Quality Assurance Forum in Tallinn, Barcelona, London, as well as NAFSA (Association of International Educators) in Vancouver, Boston and Denver; as part of conferences of universities and Japanese foundations (Copenhagen, Beppu, Tokyo) and during visits to Chinese universities. All these travels allowed for visits to universities and establishing the scientific cooperation with important scholars in the social sciences.

Prof. A. Mania has published ten monographs (most recently: Department of State i Foreign Service w polityce zagranicznej USA lat gorącej i zimnej wojny, 1939-1989 [“The Department of State and Foreign Service in the United States’ Foreign Policy During Hot and Cold Wars”], Krakow: Jagiellonian University Press, 2019; Détente and the policy of the United States towards Eastern Europe, January 1969-January 1981, Krakow: Jagiellonian University Press, 2003; The Department of State 1789-1939: The First 150 years of Participation in U.S. Foreign Policy, Krakow: Jagiellonian University Press, 2011; A History of Polish Diplomacy, Volume VI 1945-1989; chapters for the years 1947-1955, Warsaw, 2010). He has published and co-written a dozen or so collective works. He is the editor of a series of monographs on "American Studies" at the Jagiellonian University and since 2001 has been the editor of the scientific journal "Ad Americam. Journal of American Studies"; meanwhile, he has edited the “Political Science” series as part of the Jagiellonian University Scientific Notebooks since 1984. Prof. Mania is the editor of the “Momentum” publishing series promoting the publication of works on leading international problems. He has been the supervisor of around 1,200 MA students (mainly in the following fields: political science, international relations, law, cultural studies, administration, and English philology) as well as the supervisor of over thirty doctors, a reviewer in several dozens of doctoral and postdoctoral conducts. Prof. Mania has also participated in assessing the achievements of candidates for the title of professor and assesses the conclusions of the Central Commission for Degrees and Titles and the General Council for Higher Education.