In this compelling book about the history and prevalence of alcohol and drugs throughout the history of warfare, Lukasz Kamienski reveals in copious detail the countless ways "intoxication, in its various forms, has … been one of the distinctive features" of human life. - Antony Loewenstein: The Guardian. A new book by Łukasz Kamieński. 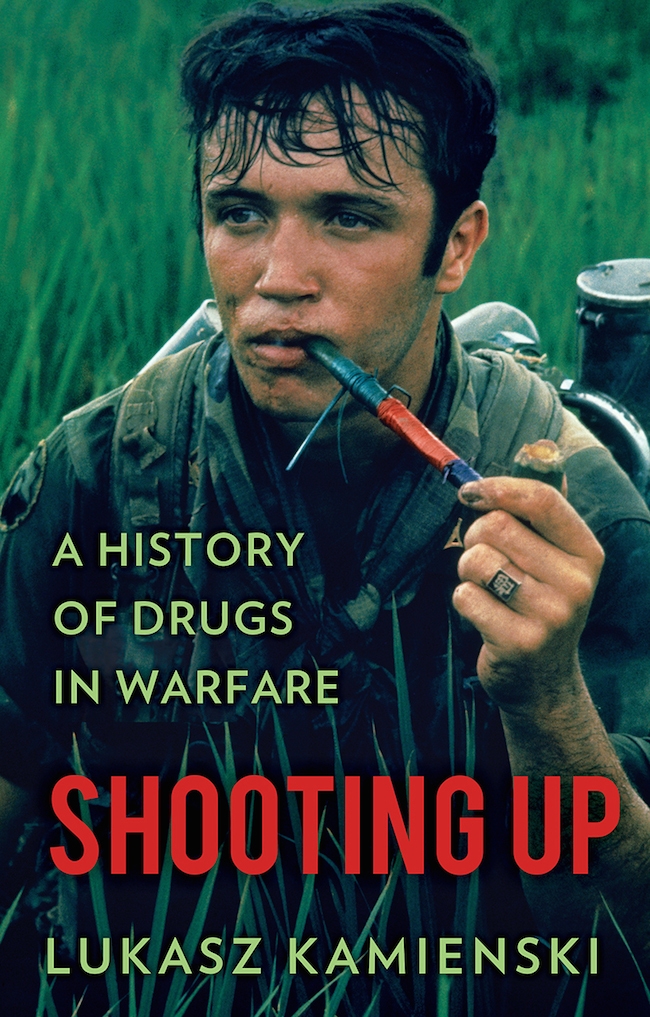 Shooting Up: A Short History of Drugs and War examines how intoxicants have been put to the service of states, empires and their armies throughout history. Since the beginning of organized combat, armed forces have prescribed drugs to their members for two general purposes: to enhance performance during combat and to counter the trauma of killing and witnessing violence after it is over. Stimulants (e.g. alcohol, cocaine, and amphetamines) have been used to temporarily create better soldiers by that improving stamina, overcoming sleeplessness, eliminating fatigue, and increasing fighting spirit. Downers (e.g. alcohol, opiates, morphine, heroin, marijuana, barbiturates) have also been useful in dealing with the soldier's greatest enemy – shattered nerves. Kamieński's focuses on drugs ‘prescribed' by military authorities, but also documents the widespread unauthorised consumption by soldiers themselves. Combatants have always treated with various drugs and alcohol, mainly for recreational use and as a reward to themselves for enduring the constant tension of preparing for. Although not officially approved, such ‘self-medication' is often been quietly tolerated by commanders in so far as it did not affect combat effectiveness. This volume spans the history of combat from the use of opium, coca, and mushrooms in pre-modern warfare to the efforts of modern militaries, during the Cold War in particular, to design psychochemical offensive weapons that can be used to incapacitate rather than to kill the enemy. Along the way, Kamieński provides fascinating coverage of on the European adoption of hashish during Napolean's invasion of Egypt, opium use during the American Civil War, amphetamines in the Third Reich, and the use of narcotics to control child soldiers in the rebel militias of contemporary Africa.

‘In this profound, troubling, and deeply informative book, Kamieński investigates the relationship between intoxicants and warfare.' — Lawrence Freedman, Foreign Affairs

‘An impressive and accessible deep dive into the topic... it makes for a bracing and fascinating study.' — Publishers Weekly

‘Absorbing and comprehensive' — The Intercept

‘Shooting Up should be read for its relentless cataloguing of the role that intoxicants have been put to in the ceaseless history of human depravity.' — Stuart Walton, Hong Kong Review of Books

‘An original and weighty survey of drug use by combatants … [Kamienski] deserves promotions and rewards. He deals in ideas of danger, risk-taking, euphoria, pain, disinhibitions and fright. … He demonstrates conclusively that intoxication is a natural and necessary state for most fighting men.' — Richard Davenport-Hines, The Oldie

‘Those who want to build their own thoughts about the direction of drugged wars would be best served by starting with Kamienski's highly impressive work.' — Paul Kan, War on the Rocks

'Kamienski's book is the first comprehensive history of drugs in combat', Irish Examiner

In this compelling book about the history and prevalence of alcohol and drugs throughout the history of warfare, Lukasz Kamienski reveals in copious detail the countless ways "intoxication, in its various forms, has … been one of the distinctive features" of human life. The Guardian

'It is easy-to-read, affordable, and a gem of a work produced by a little-known, yet brilliant, academic hailing from the esteemed Jagiellonian University in Kraków, Poland' - Parameters (Page 1, Page 2), Strategic Studies Institute, US Army War College.

'As the title suggests, this book is meant to shock us—and it does. It shocks us to learn that drugs and alcohol are routinely issued to soldiers in times of warfare and always have been.' - America

‘This in-depth analysis of the "highs" of war tells a largely untold story — of the role drugs played over the centuries in supporting troops on the battlefield, and the role they will play in future in driving the course of war. Kamieński's book will undoubtedly come to be regarded as a classic text.' — Christopher Coker, Professor of International Relations, London School of Economics

‘Traditional military histories make only passing references to soldiers' use of alcohol and various drugs. Łukasz Kamieński, however, provides us with a very non-traditional and fascinating overview of the panoply of drug use in wartime. From providing "Dutch courage" to soldiers, to actually serving as a casus belli, drugs have shaped the very nature of war itself. Shooting Up highlights the pervasiveness of drug use in war, giving us an entirely new perspective on this important dimension of the human, operational and diplomatic history of combat.' — James J. Wirtz, Naval Postgraduate School, Monterey, California

‘In Shooting Up, Łukasz Kamieński provides a diligent examination, keen view, and detailed discussion of the implications of the long standing, and often controversial use of drugs in military operations. Shooting Up is a most interesting read that makes an excellent contribution to the literature.' — James Giordano, Department of Neurology, Georgetown University Medical Center, Washington, DC, USA

‘Who knew that an historical, scholarly psychopharmacology of soldiering could be a page-turner? Kamieński's book shocks, encourages self-reflection, intellectual excitement, fury at hypocrisy, and that third Aristotelian catharsis: mental clarification. Above all, this is a book for citizens.' — Jonathan Shay, MD, PhD., Former MacArthur Fellow, and author of Odysseus in America: Combat Trauma and the Trials of Homecoming

‘If you think you understand the nature of armed conflict you'd better think again. This book shows how warfighters since ancient times have used narcotics to prepare for, endure, and live with fear and violence. A stunning new look at the way wars are fought.' — Jonathan D. Moreno, David and Lyn Silfen University Professor of Ethics, University of Pennsylvania

‘Not only the definitive history of intoxication in warfare, this beautifully written book offers a deeply informed humanistic perspective on the addictiveness of war itself. Insights from Nietzsche, first-person accounts from combat, military scholarship and biological explanations are woven together into a seamless analysis that should be required reading.' — Chris Hables Gray, author of Postmodern War: The New Politics of Conflict

‘Flipping the war on drugs, Kamieński gives us drugs at war, from the Greeks to high-tech armies, from drugs as tools of combat to combat as a drug itself. Starting with alcohol and opium, and ending in Hurt Locker territory, Shooting Up offers a novel and ambitious survey of a most timely topic.' — David Courtwright, author of Forces of Habit